skip to main | skip to sidebar

The Marion County shelter in Florida closed today so they could kill 84 dogs with contagious diseases such as Parvo, Kennel Cough and Canine Flu. No word on why some or all of the 84 couldn't be medically treated and restored to health, especially since some of the dogs being killed are symptom free.


On the opposite coast, volunteers at a shelter in San Luis Obispo County, California told a local newspaper (on condition of anonymity since their bosses don't want them talking to the media) that dozens of cats have died from or been euthanized for Distemper in recent weeks.

"Both volunteers said they believe the shelter was slow to implement an effective quarantine, and both volunteers said members of the public and inmates from the honor farm, who assist at the shelter, were still recently observed entering the supposedly quarantined area, without precautions in place to prevent the spread of the disease.

A volunteer also expressed concern that people were still being allowed to drop off cats and kittens, and that others adopting pets were not being warned of the outbreak."

The shelter director's response? He said they are not required to make such outbreaks of disease known to anyone. And I guess that's good enough for him. It will be interesting to read the Humane Society's report on this shelter, expected this month. Full article here. 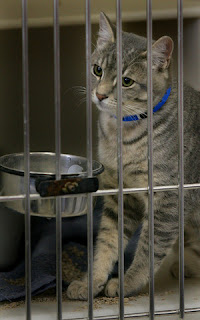 I do a lot of volunteer work including working with animals. I can't even imagine someone telling me I can't talk to the press. There is this, you know, US Constitution thing....

Is that still around? ;-P

The Terrible Truth about HSUS

Court to HSUS: Why is this the so-called humane thing to do?

HSUS Dogfighting Tip Line Busts in GA - Where are the Dogs?

HSUS and the Ongoing Campaign to Kill "Rescued" Bust Dogs

Don't Tread on Me HSUS

The Terrible Truth about PETA

Our Local No Kill Shelter

Dr. Brisbin: "The few studies which have been conducted of the structure of the skulls, mandibles and teeth of pit bulls show that, in proportion to their size, their jaw structure and thus its inferred functional morphology, is no different than that of any breed of dog.

There is absolutely no evidence for the existence of any kind of "locking mechanism" unique to the structure of the jaw and/or teeth of the American Pit Bull Terrier.

A little book to bring comfort: The Last Will and Testament of an Extremely Distinguished Dog by Eugene O'Neill

NOTICE: The views expressed in this blog are solely those of the writer. The author is a citizen of the United States and therefore communications are protected by the First Amendment to the U.S. Constitution. Any attempt to infringe on that right, whether actual or threatened, will be dealt with accordingly.