skip to main | skip to sidebar

PETA In Their Own Words 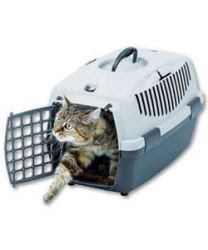 PETA's Agenda Regarding Companion Animals: The extermination of all pets and an end to pet ownership. When you combine their kill rate (PETA says they killed over 97% of the animals surrendered to them in 2006) with their stated goal of a "No Birth Nation" for pets, what other possible conclusion could there be?

Killing almost every pet they can get their hands on
+
no new pets born
=
an end to pet ownership.

None of your Business: Know who you are doing business with - these companies are PETA supporters (site is updated periodically).

You Can Fool Some of the People, Some of the Time: PETA operates a number of websites under other names - listing here.

Would You Kill for this Job?: From a job posting on PETA's website for a Field Worker position:
Listed first under "Qualifications":
"Basic animal-handling skills and euthanasia certification (on-the-job training will be provided)"

Call Me Crazy: PETA thinks animal killers need psychological help, jail time and should be stripped of their rights to harbor animals. That is, unless the animal killers are PETA employees. Regarding the 2005 charges against two PETA employees who were caught taking pets from NC shelters then killing them and dumping their bodies in a Piggly Wiggly dumpster, PETA stood by their man, maintaining that although their staffers "may have exercised poor discretion in dumping the animals behind the supermarket, they and other employees who did similar work were acting humanely when they euthanized animals removed from shelters."

And Finally: Some testimony from the 2007 trial - this story is not one of the crimes PETA employees were charged with but just another example of their deceptive practice of getting owners to surrender pets with the hope of finding them new homes, only to have them killed by PETA immediately. In this case, an animal control officer was hoping to find a new home for one of his own pets.

Bertie County Animal Control Officer: "I knew that by talking to [the female PETA employee on trial] that she could possibly find a home for it, someone that was looking for a good dog. To my understanding, she found a home for it in Virginia."

(Actually, the PETA staffer drove the dog back to PETA headquarters in Norfolk and killed him there, stopping along the way to take photos of the dog looking, as his name suggested, "Happy".)

If you have the stomach for it, you can read a complete account of the trial on PetaKillsAnimals.com

As long as mainstream media keep citing PETA as an animal authority or harmless kooks who make fun copy for them, the general public will have a hard time recognizing that they are murderous barbarians who want to wipe out dogs as our companions.

As Jan said, they keep being quoted as if their opinion is expert and of course, they keep snowing the people who support them.

The Terrible Truth about HSUS

Court to HSUS: Why is this the so-called humane thing to do?

HSUS Dogfighting Tip Line Busts in GA - Where are the Dogs?

HSUS and the Ongoing Campaign to Kill "Rescued" Bust Dogs

Don't Tread on Me HSUS

The Terrible Truth about PETA

Our Local No Kill Shelter

Dr. Brisbin: "The few studies which have been conducted of the structure of the skulls, mandibles and teeth of pit bulls show that, in proportion to their size, their jaw structure and thus its inferred functional morphology, is no different than that of any breed of dog.

There is absolutely no evidence for the existence of any kind of "locking mechanism" unique to the structure of the jaw and/or teeth of the American Pit Bull Terrier.

A little book to bring comfort: The Last Will and Testament of an Extremely Distinguished Dog by Eugene O'Neill

NOTICE: The views expressed in this blog are solely those of the writer. The author is a citizen of the United States and therefore communications are protected by the First Amendment to the U.S. Constitution. Any attempt to infringe on that right, whether actual or threatened, will be dealt with accordingly.